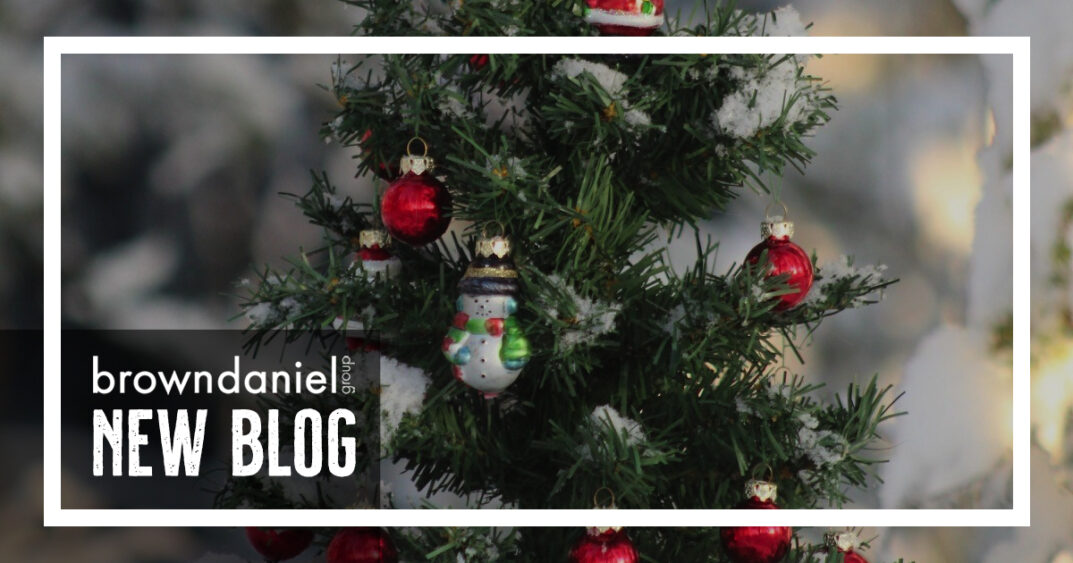 A living evergreen tree taking up a place of prominence in a living room or foyer…..oversized hosiery hung from a fireplace mantel…..bunches of herbs hanging in doorways hoping to inspire a secret kiss…..when you begin to think about many of the most popular items we use to decorate our homes for the Christmas season, you might scratch your head and wonder, “why do we do that?” The way we adorn our homes for winter holidays here in the modern day United States, is a grand mix of immigrant customs, religious traditions, and hand-me-down pagan celebrations. Many of the most popular Christmas decorations come to us from the traditions of 16th century German Christians, attempting to adapt their celebration to the pagan rituals already followed for ages by the nearby clans. Still others have a much more recent origin. Read on as we explain the history of a few of our most beloved Christmas decor items.

Have you ever wondered why we bring a living tree in from the forest (or the Kroger parking lot), to decorate for the season? According to historical tradition, German Christians began bringing an evergreen tree inside from the forest during the 16th century to decorate for the Christmas holiday. This German tradition could be traced back to the story of a missionary who sacrificed a giant “holy tree” to the Norse god Thor. However, we can also trace the tradition back just as far in other parts of the world. Green fir trees were used by the Romans to celebrate the winter solstice, and ancient Egyptians had a similar custom – they would decorate their homes with green palm rushes on the winter solstice to celebrate the sun god Ra’s recovery from sickness during winter. To them this symbolized life conquering death.

Incidentally, artificial trees have been in use almost as long as Christians have been decorating real trees for the holiday. Poorer families in 16th century Germany who could not afford a tree often build pyramids out of wood that they would then decorate with paper, apples and leaves to mimic the appearance of an actual tree.

Ancient Romans decorated with wreaths to celebrate a winter festival known as Saturnalia. Some people also believe that wreaths were used to countdown the four weeks before Christmas in medieval Germany. Still others claim that wreaths were invented completely by accident during the 16th century, as a way of making use of clipping leftover when Christmas trees were cut and pruned. The excess greenery was shaped into a wreath, which at the time would have been used to further decorate the Christmas tree itself, and to symbolize eternity.

The tradition of hanging mistletoe above our heads in doorways and arches traces its roots back to ancient Greece. The plant, which continued to bloom during the winter months, was associated with fertility and therefore became part of the Greek festival of Saturnalia and later was featured in ancient Greek marriage ceremonies. Later during the Roman era, enemies at war would settle their differences beneath mistletoe, which for them had come to symbolize peace. Romans also used the plant to decorate their homes in midwinter as an offering to their gods. They mythology surrounding mistletoe was widespread, and the Norse people also had a tradition of kissing under it based on a myth told about their goddess of love, Frigga. In more modern times, kissing beneath the mistletoe, and using it as a Christmas decoration, was popularized by the servant class in Victorian England. The evergreen plant was a cheap and easy to find seasonal plant used to decorate modest homes. Eventually the popularity of the plant spread to the higher classes, and eventually with English immigrants it found its way to American homes.

If you’ve seen old family photos taken in front of a 1950s era Christmas tree, then you may have noticed how popular tinsel was in the mid to late 1900s. While it has fallen out of fashion somewhat over the years, tinsel was once an indispensable part of many Christmas decoration collections. The tradition began as an ostentatious display of wealth in 17th century Germany. Wealthy inhabitants of Nuremberg began displaying strands of silver on their Christmas trees as a way of showing off, and also because they noticed how it reflected the light of the small candles they placed on their trees. Soon those of lesser means were copying the trend using cheaper materials such as copper or tin. When those materials became scarce during World War I, tinsel made from aluminum and lead became popular. Unfortunately aluminum proved too flammable and lead too poisonous. By the 1970s, tinsel was commonly manufactured out of polyvinyl chloride film coated with a metallic finish. The new PVC tinsel didn’t remain popular for long however, as people began to realize just how bad for the environment single use plastics could be. Now you’ll likely only see it in those treasured family photos.

The candy cane is another traditional Christmas item that can be traced back to German origins. According to legend, a choirmaster in Cologne handed out these sugar sticks to young singers so they would be quiet during religious ceremonies. The sweet treats were purportedly shaped like canes as a nod to shepherds’ crooks, mainly to appease the elders in the cathedral who didn’t immediately approve of candy in the holy space. While this story could be true, its just as likely that the curve of the cane was added later to make them easier to use for decorating Christmas trees. The candy that became known as the candy cane didn’t otherwise look much like the candy canes we know today. The original canes were all white, and lacked the peppermint flavor we have come to expect. The red stripe and minty flavor were both added around the turn of the 20th century, about 50 years after they first made their debut as a decoration on American Christmas trees. Also, the candy cane’s hook may not be modeled after a shepherd’s hook or added for utilitarian purposes. Some say the candy cane is meant to look like a “J” for Jesus and that the red color is a reference to the blood of Christ, but neither has been proven.

With their bright red and green colors, poinsettias look like they were made to add life to homes fully decorated for Christmas, but they were first used to adorn nativity scenes in Mexico. In 1828, these flowers, known locally as “flor de nochebuena,” caught the eye of the U.S. Minister to Mexico, Joel R. Poinsett. He brought them home and they quickly became a popular symbol of the holiday season. The plant received its Anglicized name from Minister Poinsett, and by the early 1900s, they were more popular in the United States than in Mexico.

Several of our Christmas traditions can be explained by the legend of St. Nicholas, as popularized in the now iconic 1823 poem by Clement Clarke Moore, The Night Before Christmas. According to the original legend on which the poem is based, the kind St. Nicholas heard from villagers that a local widower was too poor to provide his three daughters with dowries for then to be wed. The widower would accept no charity, so St. Nicholas stuck into his home late on Christmas Eve by sliding down the man’s chimney. Once inside, he filled the daughters stockings with gold coins – stockings that just so happened to have been freshly laundered and hanging by the fireplace to dry. While the story was changed somewhat in the famous poem, the idea of stockings hung from the mantle to be filled with goodies spread throughout the United States over the course of the mid-1800s.

The first Christmas lights to be placed on trees as decoration were actually tiny candles, a practice that seems frighteningly dangerous in this day and age. According to legend, Martin Luther was walking home through the woods late one evening when he became mesmerized by star shining upon the evergreen trees. He decided to recreate the spectacle in his own home by adorning a fir tree he had moved indoors with small lit candles. Much later, Thomas Edison invented outdoor Christmas lights as a way to show his holiday spirit. He hung twinkling lights outside of his laboratory, so passengers on the train that passed by just outside of his lab could see the display at night. It was then Edison’s protegee, Edward Johnson, who created the first string lights to be used indoors to decorate Christmas trees a few years later. In the parlor room of his New York City home, Johnson hand-wired 80 red, white and blue light bulbs, attached them to a generator, and strung them all around his tree. The beautifully (and much more safely) lit tree attracted so much attention from passersby that eventually the story of his string lights was covered in the national press.