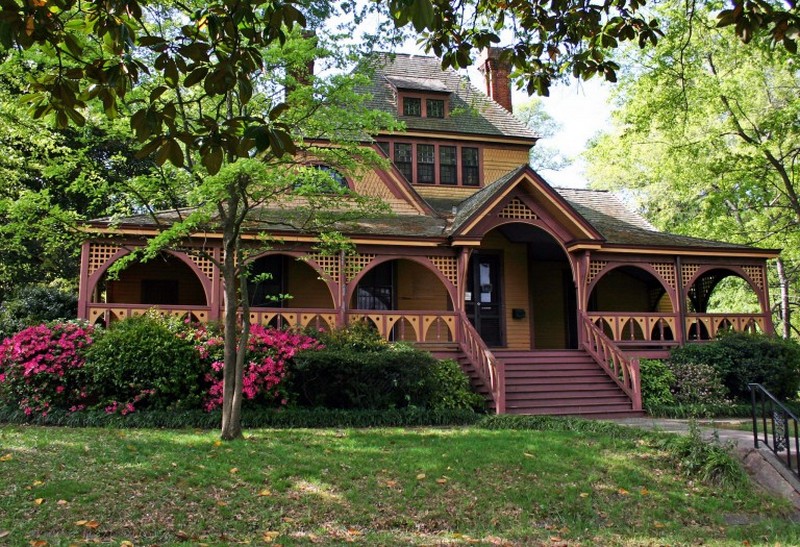 Most of Atlanta’s beautiful historic homes were burned and perished during Sherman’s famous March to the Sea during the Civil War. We are lucky to have a few relics that survived the campaign and still stand today, open to history and design buffs alike. From the small apartment where Margaret Mitchell penned her famous novel to the home of a future president’s mother, much of Atlanta’s early history is preserved in these homes.

Built in 1839, Bulloch Hall is the historic home of early settler Major James Stephens Bulloch, whose daughter Mittie Bulloch was married in the dining room of the home to Theodore Roosevelt Sr, meaning Mittie was the mother of the 26th President of the United States. This Greek Revival home, along with the other grand estates of the pre-war era in Roswell’s historic district, were left untouched by Sherman as a favor to the city’s northern-born founder Roswell King.

Margaret Mitchell used to refer to her apartment as “The Dump,” but it was here in her tiny bottom floor quarters that she wrote her Pulitzer Prize-winning masterpiece, Gone With the Wind. When you tour the 1899 Tudor Revival home, you can learn about Mitchell (know to friends as Peggy Marsh) before, during, and after the book, and about the movie, and its huge premiere in Atlanta. Like the Swan House coming up next on our list, the Margaret Mitchell House is now preserved as a part of the Atlanta History Center.

The historic Swan House was built in 1928 for Edward Inman and his wife Emily after Edward had amassed quite a fortune as a cotton broker, banker and real estate magnate. His lavish home was designed by famed architect Philip Shutze, and features a swan motif throughout the house. Now part of the Atlanta History Center, when you tour the home today you will be guided by an actor playing Edward Inman himself, who will tell you all about 1920s business and politics. He will also introduce you to his wife, Emily – suffragette and society matriarch. The house is still decorated with many of the Inmans’ original furnishings, and it has attracted widespread attention as a backdrop for The Hunger Games: Catching Fire and The Hunger Games: Mockingjay, Part 2.

This Queen Anne Victorian home belonged to Joel Chandler Harris, author of the Br’er Rabbit stories. Located in Atlanta’s historic West End, the home was built in 1870 and opened as a museum in 1913, to preserve both Harris’s legacy and the heritage of African-American folklore. It is Atlanta’s oldest house museum, with over 100 years in operation. The home still contains furnishings owned by Harris and utilizes the original paint colors.