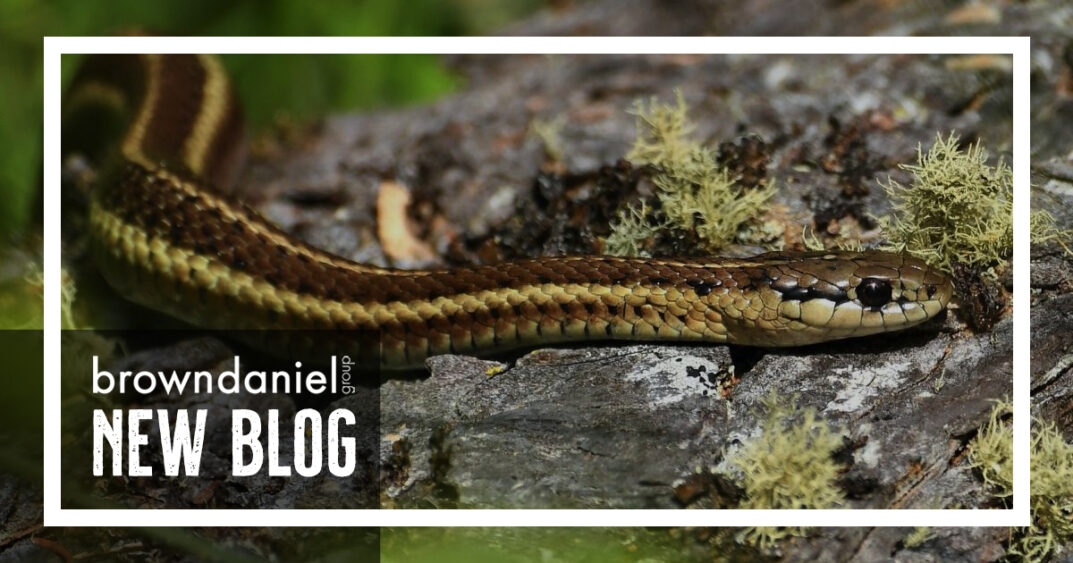 Unless you live in one of the farther out suburbs, you may assume the only snakes you’ll be seeing this year are at Zoo Atlanta. However, much of the land that metro Atlanta now occupies was almost rural just a few decades ago, and new home construction is pushing Atlanta farther and farther out into the surrounding, greener areas. As subdivisions are increasingly built on areas that were formerly forested parts of north Georgia, humans and snakes are more and more likely to share space. You may find them among your home’s decorative front shrubs, hiding beneath plants in your backyard garden, and even climbing up the small tree on your condo’s balcony. Particularly after a mild winter like the one we’ve just seen, snakes are out and about more than ever, and they don’t always stop at the city limit sign.

While the vast majority of the snakes you’ll find in your gardens and yards are mostly harmless, there are a few varieties of venomous snakes you could encounter in the metropolitan Atlanta area. By far the most common of these is the copperhead, which can be found all across northern Georgia, clinging on to habitats in urban areas wherever a small patch of forest still exists. If you purchased your home partially because of the eye-pleasing green space that was preserved during the building process, you also need to be aware of the copperheads that may have been preserved along with it. Copperheads are fairly large with wide bodies, triangular heads and a reddish tan hourglass pattern. They are responsible for the majority of snakebites that happen in the Southeast each year.

The remaining venomous snakes in Georgia will almost never be found in the heavily populated suburbs around Atlanta. The cottonmouth, more commonly known as the water moccasin, sticks to the swamps and wetlands of central and south Georgia, with the occasional loner making his way up to northwest Georgia. Cottonmouths are typically dark in color, with the same triangular head shape as their lighter, copperhead counterparts. Keep your eyes peeled for these snakes if you are going tubing or kayaking along a more rural waterway.

Three types of rattlesnakes can be found in Georgia, but the Eastern Diamondback, the Timber or Canebreak, and the Pygmy are all unlikely to be seen in metro Atlanta. All three species are easily identifiable by their telltale rattle, but they are most often found in the rural mountainous regions to our north. Watch out for these snakes if you are going hiking or camping for the weekend well north of the city. Of course, just because these rattlers are uncommon in the metropolitan Atlanta area, this doesn’t mean it’s impossible for you to find one. If you see or hear the warning rattle, avoid going closer to one of these urban rarities.

There are nearly 40 varieties of non-venomous snakes in Georgia, many of which are great to have around, especially if you have a large lot and/or a garden on your property. Many of the snakes you are likely to find in metro Atlanta are known to eat small rodents such as rats and mice. Corn snakes, rat snakes and kingsnakes are examples of snakes that are good to have around for just this reason. Even better, the kingsnake in particular is known for eating other, more dangerous snakes. A kingsnake will happily dine on a copperhead, cottonmouth or rattlesnake, so having one hanging around your yard can actually protect your family and pets from a dangerous run-in with one of the rarer venomous snakes you might encounter in northern Georgia.

If you have a garden, you would actually be very lucky to have a De Kays Brown Snake in your midst. These small, nocturnal, and seldom seen snakes feed on slugs, millipedes and mites, and even have a specialized jaw that allows them to remove snails from their shells in order to eat them. This is wonderful news to gardeners, because snails and slugs can quickly destroy all of their hard work by eating through the tender leaves of carefully tended plants. Some gardeners will even purchase these snakes to rehome into their gardens in order to control their pest problem without resorting to using chemicals.

What Should You Do if You See a Snake?

Keep in mind that all snakes, whether they are poisonous or not, do not see you as prey. They know they cannot eat you and they’d prefer to not deal with you at all. If left alone in your yard, they will carry on with their route, and you likely will not see them again. The only reason a snake will bite is if they feel they are being attacked as well and at that point it is their instinct to mount a defense. This is why it is very important to teach young children the right thing to do if they see a snake. Picking it up, chasing it, throwing rocks at it, these are all potentially dangerous moves, especially if the child cannot tell if the snake is venomous or not. Likewise, family pets should be properly trained with a “Leave it!” command so that if a snake is encountered while out for a walk, you can distract your dog before anything disastrous occurs.

Also keep in mind that just because a snake is not venomous, doesn’t mean it can’t pose a problem if you get too close. Non-venomous snakes will also bite as a defense mechanism if they feel threatened by you, and while the bite may not send you to the hospital, it will likely cause you a good bit of pain. The puncture wounds from snake fangs are prone to infection and if they are deep, can hit muscle and necessitate a trip to urgent care for antibiotics.

In the rare event you or a family member is bit by a venomous snake, avoid the old wives tales and myths you have heard regarding immediate wound care. Despite what you may have heard, you should not use a tourniquet, for example. The pressure from the tourniquet can cause the venom to stay in one location, leading to a higher potential of tissue damage and even death. You also should ignore the advice you may have heard about sucking venom from a snakebite. The best thing you can do is seek medical care immediately, whether by calling 911 or driving the bite victim to the nearest emergency room. All of the major hospital emergency rooms in the Atlanta area have CroFab on hand, which is an FDA-approved treatment for both adults and children who have suffered a venomous snake bite. CroFab can be used for bites from rattlesnakes, cottonmouths and copperheads, so antivenom specific to each snake species is no longer needed.

Ridding Your Property of Snakes

So what if you don’t have a snail-ridden garden, have never seen so much as a chipmunk where rodents are concerned, and are generally creeped out by the appearance of any sort of reptile near your slice of the city? Unfortunately, there are no foolproof ways to keep your property snake-free. You can of course, make your home less hospitable to our slithering friends. Seal up any openings where a snake could potentially gain entry to your home. This includes the spots where pipes enter your house, the bottoms of doors, and cracks that can appear in eaves and roof overhangs. Do your best to make sure snakes have no potential point of entry to your home.

Make your yard less inviting as well by clearing out any potential hiding places quickly. Do not allow fallen leaves to gather, and don’t trim a tree then allow the branches to sit for very long. Leftover construction materials should be removed as soon as the project is complete, and keep shrubs and other vegetation neatly trimmed. This has an additional advantage of also getting rid of the habitats where rodents make make their homes. If a snake has no food supply, it will be forced to relocate. Close trash cans tightly and make sure compost containers are securely sealed. If you do have a rodent problem, have it addressed immediately via a licensed pest control agency.

If you find that you have multiple encounters with a copperhead or other venomous snake on your property, it might be worth the time and money involved to invest in a snake-proof fence, at least for the portion of your backyard where children and pets frequently play. Installing such a fence involves burying 1/4-inch mesh wire screening 6 inches deep in the ground, and building it up to 30 inches high, slanting outward at a 30 degree angle. The fence’s supporting stakes should be inside the fence and any gates must fit tightly. All vegetation should be removed both inside and outside of the fence. If your yard is already fenced, you can snake-proof along the bottom only in the manner described above.

Calling in the Professionals

There are many companies throughout the metro Atlanta area that will come to your home and attempt to remove a nuisance snake from your property. The problem here is, much like taking the car to the mechanic, the technician you call has to be able to find the problem. These reptiles are experts at hiding, so unless you have it trapped, the tech may or may not be able to locate the snake. If you do call for this sort of help, you can expect to pay between $120 to $200 for their visit. This can get expensive if you have more than one snake frequenting your yard. Also, if you choose to hire a professional service, make sure they are licensed and insured, or you may be liable if they are injured on your property.

Your best bet, as unpleasant as it might sound, might just be to attempt to live in harmony with your reptilian neighbors. We have overtaken much of their familiar habitat already, so we have to expect to see them on occasion. Just remember the age-old adage – they’re more afraid of you than you are of them!