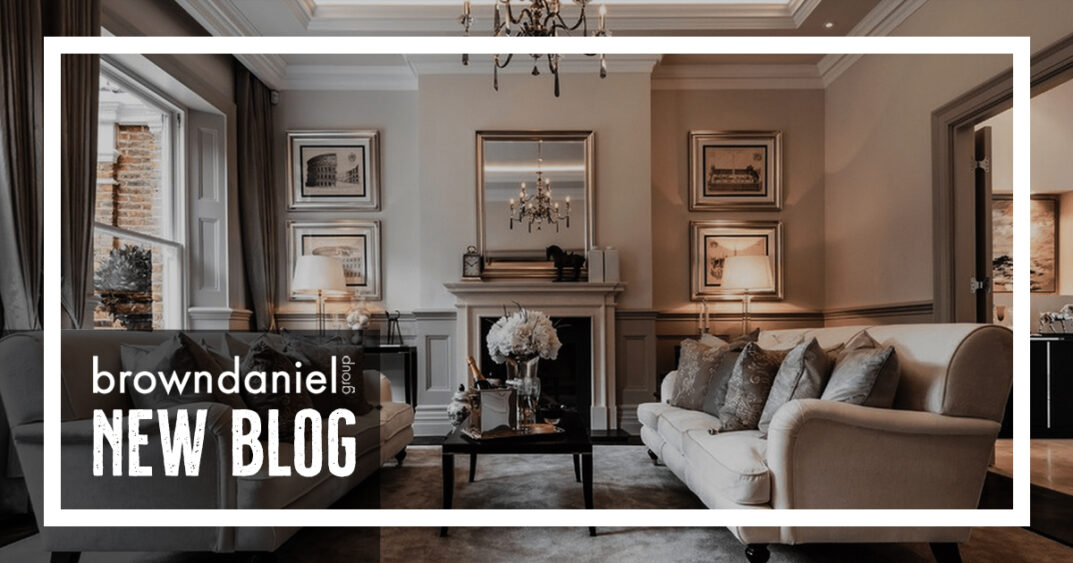 What do you call the room where your family gathers at the end of the day to lounge on the sofa, chat, and perhaps watch TV or play a board game? Is the name you call it now the same thing you called it growing up? And do you have another, similarly outfitted room that you call by another name? The terms we use for these rooms may seem to be interchangeable, or for some of us, they have a set definition. But for every person who is certain that a den is a den and everyone knows what that means, you’ll find someone else who waltzes in and proclaims that this den is “the cutest living room she’s ever seen!”

So is there a set definition to these terms? Has the terminology changed over time, or is it a matter of personal or even regional preference? My personal experience differs from that of my husband. Born and raised in a modest home in rural northwest Georgia, we only had one such room, and it was always referred to as the living room. My friends and family all had similar modestly appointed homes, and all referred to the main room of their house, containing the sofa, recliner, TV and most of the time, the family, as the living room. The few acquaintances I knew who had an additional main room containing comfortable furniture where one could entertain guests all referred to this “other” room as the den. The den tended to be decorated a bit more formally, and almost never included a television. Imagine my surprise to find out from my husband that he grew up identifying these two rooms by exactly the opposite terminology! The informal area where his family gathered to play games and watch TV was the den, and the seldom used and more formal room was without fail, always called the living room. And just as with my experience, everyone else he knew also identified the rooms in their home in this manner.

The Origins of the Living Room

So in the living room versus den debate with my husband, who is correct? As much as I hate to admit it, by commonly accepted definitions, my husband is in fact right. According to interior design experts, the living room can be identified by its location within a home, and by its formality, both in use and décor. Living rooms tend to be located just to the right or left of the front entryway of a home, making them the first place formal guests are welcomed into. This means that living rooms are also the prime location for showing off some of your finer belongings, from high end furniture to expensive china and treasured antiques.

Has it always been this way? Not at all. The terms we use and the way we use the rooms in our homes have changed greatly over time. The formality of the living room in the United States traces back to the 17th century, where a living room was found in only the most affluent of homes. While the room was around at that time, the term “living room” was not. Instead you would often hear this room referred to as the parlor, and it was used as a place where distinguished guests were welcomed and left waiting and mingling until formal meals and events began.

Fast forward a couple hundred years and this room came to have a somewhat ominous connotation. In fact, this rarely used room at the front of the house that was still known at the time as the parlor, was gradually becoming more of a “dead room” than a “living room.” In a time before funeral homes and a quick and efficient burial process, the parlor was usually the best option for a location where a family could place their deceased loved ones during the mourning period prior to a funeral. Guests would still be welcomed into this room, but not exactly for a celebratory reason.

As the Spanish flu pandemic of the early 1900s began to wane, and as formal funeral homes became popular in even the most rural of areas, a room for housing a deceased loved one was no longer needed. The change in the way people thought of this room was actually due to a rebranding effort on the part of the Ladies Home Journal magazine that resulted in the naming of the room to the “Living Room” as a way to disassociate the room with funerals and dead bodies.

So What Exactly is a Den?

The den is a term historically used for another room altogether, one that is usually located just off the kitchen, where playing children can be easily watched over as you cook, or perhaps where you can catch a view of the big game while cleaning up from lunch. Furniture in the den is more durable, made from tougher material that can handle daily wear and tear. The concept of a den came about in the mid-1900s, when the post-war economy was burgeoning and homes were being built bigger and bigger, with more rooms than were deemed necessary by previous generations. Baby boomers grew up in these larger homes, learning as children that the den was their domain, but the living room should be left alone.

When it comes to the terms den and family room, these two terms actually have become interchangeable. As described above, the den is the room where the family informally gathers, where the television is located and where children are often found climbing over couches and jumping from ottomans. So it makes sense that the den would also be referred to as the family room, since the family is precisely what you will primarily find there.

It wasn’t always this way however. When the term den first became popular in describing a room in our growing American homes, the word denoted a small, private space devoted to a particular hobby or interest. This could mean a home office, a library, or a craft room. The room was rarely more than 16 square feet in size, and was often tucked away from the rest of the home’s common areas. However, as televisions grew in popularity, many families elected to put their TV in the den for lack of another better location. Over the years, the den grew and the family invaded, so now the terms den and family room have come to mean the same thing.

What About Sitting Rooms?

While some homes may boast a sitting room in their descriptions, a true sitting room has become quite the rarity among modern construction. What many people refer to as a sitting room is more likely simply a renamed formal living room. A true sitting room is an additional room that in previous times would have been used for guests to have a quiet spot to relax after a long journey, often either on horseback or in a bumpy carriage. The room was specifically for…..well, sitting, and would be filled with overstuffed chairs and fluffy sofas. Once guests had regrouped and felt up to being entertained, they would then enter the parlor (later to become the living room).

While current homes rarely contain a traditional sitting room like what is described here, a sitting room or sitting area adjacent to a master bedroom and/or guest suite is growing in popularity. This room is meant to be a quiet spot where the owner or honored guest can escape to for quiet repose. These rooms would rarely be located near an home’s entrance and instead would be tucked away from common areas.

While many homes built today still include a space for a formal living room, currently there is a trend away from spaces that do not seem to be perpetually useful. Home buyers and renovators are getting more and more creative with the space that was formally described as the formal living room. For some this room has become the “cocktail room,” with the addition of a bar sink, mini fridge and shelving for glasses and spirits. The cocktail room is used for entertaining guests, but also for relaxing at home, especially after young children have been put to bed for the night.

Another option for the formal living room is to turn it into a library, particularly in homes that do not have another location that could be used in such a manner. If you do not entertain very much, especially not in a formal manner, but are a bookworm, the small formal room at the front of the house might be the perfect place to display your extensive literary collection.

Still other people choose to repurpose their formal living rooms into a home office, particularly with the influx of people working from home either temporarily or permanently due to the Coronavirus pandemic. This may mean adding French doors to one or more of the room’s entrances so that it can be closed off for privacy during video calls or to simply dull the noises caused by other members of your household.